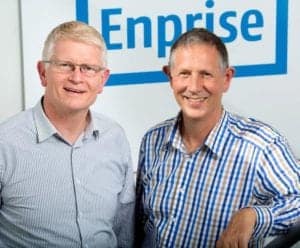 Tim Mulcock was a co-founder of EMS Cortex, a global cloud control panel provider for the cloud/hosting industry. The company was acquired by Enprise in 2006 and subsequently sold to Citrix Corporation in 2011 (for an officially undisclosed amount but reported as being $20 million). The EMS Cortex sale to Citrix was the first large international trade sale of a New Zealand cloud software company.

“In the software business first of all you invest in people,” Mark Loveys says. “Tim has a great track record in terms of his ability to see a market need and use the dynamics of the cloud computing model to develop and bring to market truly world leading cloud solutions.

“I’m very enthusiastic about the synergies between Datagate and Enprise. Datagate will leverage Enprise’s extensive international contacts within the hosting industry and also leverage our strong background in Business Management and ERP Software.  Already, Datagate and our Enprise Solutions division are talking in unison with common potential customers.

“Datagate has a particularly sharp focus on cloud and hosted service providers. These comprise a strong global market vertical that Enprise can apply to its international sales channel and ERP-based partnerships,” Mark Loveys says.

Datagate will retain its own brand under the Enprise Group umbrella.